In the Vineyard and Winery: The 2018 vintage was unusual in that it was a completely normal year, at least as far as the grapes in Amador County were concerned. Temperature fluctuations were typical in the spring with warm weeks followed by cooler ones but no late frosts to affect the crop. The rainfall reached the normal average of approximately 28 inches with some nice late spring showers that did not impede pollination. As you may recall from a previous newsletter, grape vines are hermaphroditic, and as such, are self-pollinating. Rainfall at the wrong time can wash pollen from the flowers resulting in incomplete clusters afflicted by what is called shatter. The summer, as expected, was hot and dry, but with cool nights that allowed our Mediterranean varieties to thrive. Our white varietals (Albarino, Verdelho, and Viognier) ripen earlier than the red varietals, and are typically picked at the end of August. This year was right on schedule. It then started to cool down, and the ripening of the red varietals also slowed down giving the phenolic compounds in those grapes a little extra time to more fully ripen. This will add complexity and structure to those wines which is a nice development. The only downside is that everything will probably reach ripeness at about the same time, and Joel and Augustin will be extremely busy in the latter part of September and early October. Even now, the winery is starting to fill with the fragrant aromas of fermenting wine. 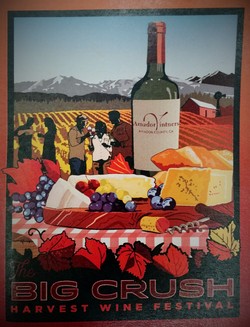 Upcoming Events: Don’t forget the Amador Vintners’Association annual “Big Crush” wine tasting extravaganza! This year’s event is scheduled for October 6th & 7th. Visit the Amador Vintners’ Association website at Amadorwine.com for tickets and event details. Presale tickets are $50 for both days of the weekend, $40 for Sunday only and $10 for a designated driver. Tickets are available online through October 1st, and will also be available at participating wineries the day of the event for an additional $10 for both days and $5 for Sunday.

At Bray Vineyards, in addition to our regular lineup of award-winning food-friendly wines, Eric Burns will be serving the best Lasagna Soup you have ever tasted. Ken Teel (aka Tofu Teel) will also be on hand to entertain you throughout the day, playing a unique blend of cool jazz and blues music on his acoustic guitar. Our inventory on some of your favorite wines is getting low, so we will be offering a “Big Crush Special” on several of these fine wines. The 2014 petite Sirah, the 2016 Barbera Rosato, and the 2016 Verdelho will be on sale at a discounted price of $99 per case. Feel free to mix and match to get your perfect case or half-case combination.

Trivia: Unlike most major wine grape varietals whose origin is obscured by myth, legend and time, the history of Alicante Bouschet is well known. Alicante was created on purpose to fill a void in French winemaking. Its creation was brought about by the confluence of two unrelated developments: canals and imperialism. 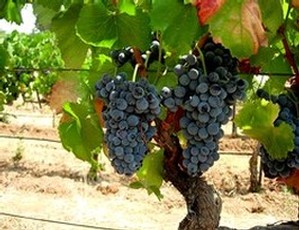 The Romans were the first to express an interest in joining the Mediterranean to the Atlantic with a canal, a concept also expressed by Charlemagne. However, it was a French farmer, Pierre-Paul Riquet, with an extensive knowledge of southwestern French rivers who actually attempted the feat. He designed and built the “Canal Royal de Languedoc” in 1667, but it wasn’t until 1856 when an extension called the “Canal de Garonne” finally linked the Bordeaux region with the Mediterranean. With the immediate success of this first canal, France embarked on a quest to use canals to link all four of its major rivers: the Seine, the Loire, the Garonne, and the Rhone. Viewing the French canal system as a waterway version of our own interstate highway system is an appropriate analogy, and its development is inextricably linked to France’s political and economic development. The canal pertinent to the creation of Alicante Bouschet was the “Canal de Bourgogne” started in 1777. When completed in 1832, it linked the Saone, a tributary of the Rhone, to the Yonne, a tributary of the Seine. It was then possible for bulk cargo to travel by canals and waterways from the Mediterranean to Paris.

Imperialism is the next piece of the puzzle. In 1827, two merchants owed Hussein Dey, the Ottoman ruler of Algiers, money, but they could not pay their debts until the French paid them for wheat they had sold to the French Army. The Dey summoned the French Consul, Pierre Deval, to demand that the French commit to paying their debts. When Deval gave only unsatisfactory answers, the Dey expelled him from the country waving him away with his fly whisk, a type of fan. One of the feathers of the fan touched the consul, who in anger informed the French Government that the Algerian ruler had struck him. The French initially demanded an apology which was followed first by a blockade and later by an invasion. Three weeks later Algeria was a colony of France. In time, immigrants from southern Europe followed, and their influx changed the Algerian economy into a producer of cash crops which were mainly imported to France. Wine became the county’s most important single export.

In the early 1800’s the French used their new canal systems to flood the markets with wines from Le Midi (Southern France) that were inexpensive, ordinary, light in color, and low in alcohol. Known as petit rouge or little reds, they were consumed by French workers as every day table wines. Later, competition from the darker more concentrated, and higher alcoholic wines from Algeria forced a change, and Alicante Bouschet was developed to improve the Le Midi wines. At the time, Aramon was one of the most widely planted French varietals, and although resistant to powdery mildew, its propensity for high yields produced rather lightly colored bland wines. In 1824, Louis Bouschet crossed Aramon with Teinturier du Cher in an attempt to add more color and named the varietal Petit Bouschet. Teinturier is a French term meaning to dye or stain. In a Teinturier varietal the anthocyanin pigments responsible for color accumulate both in the skin and also within the pulp of the berry unlike other red grapes. This produces wines of a deeper darker hue. Louis’ son Henry created a string of different varietals by crossing Grenache with Petite Bouschet. He named his first attempt in 1855 after himself, Alicante Henri Bouschet. Later iterations were named Alicante Bouschet Nos.1 through 13. All of these siblings were morphologically similar but produced wines that varied in quality. Some of these variants never made it past grape collections while others were propagated and tested in vineyards. In most cases they were just given the generic name of Alicante Bouschet. Fifty years later, all but the most productive had fallen from favor which left the original, Alicante Henri Bouschet. Unfortunately, it was impossible to distinguish the original from Alicante Bouschet No.2, so some vineyards in France are a combination of the two. For simplification the varietal is just called Alicante Bouschet. It was Alicante’s color enhancing quality that induced the winegrowers of southern France to use it primarily as a blending partner for lighter colored wines.

A surge in plantings occurred in the late 19th century to replace Phylloxera devastated vineyards thanks in part to its deep color and impressive yields. Acreage has declined since the turn of the 20th century, but Alicante still ranks thirteenth in total French acreage. It can make soft fruity wines, but in France, Alicante is most often used as a blending grape where its teinturier heritage adds color as well as fruit to the blend. Interestingly, because it is a red fleshed Vitis Vinifera, French wine laws have sanctioned its use in production of “quality wine”; something that is prohibited for other hybrid varietals. Not surprisingly, Alicante has drifted south across the Pyrenees, and under the name Granacha Tintorea actually has more acres planted in Spain than in France. It is also increasing in popularity in Portugal where it produces impressive dark structured deep-fruited wines particularly in the drier hotter terroirs.

New world plantings are found in Chile, Argentina, and of course in California where it became extremely popular during Prohibition. The 18th Amendment, prohibiting the manufacture, transportation and sale of intoxicating beverages, was passed in 1919. The Volstead Act was the law intended to implement Prohibition, and section 29 of that legislation allowed the head of every household to produce up to 200 gallons of “non-intoxicating cider or fruit juice. This loophole in the law made it legal to purchase grapes for juice production, and the grapes were often sold with carefully worded instructions on what “not to do” to prevent the accidental production of wine.

Two hundred gallons equates to approximately 1000 bottles of wine or about 2 ½ bottles per day; more than enough to keep a resourceful family happy, and many California grape growers in business. New York’s Penn Station built a special auction room to handle the grapes and in 1928 one lot of 225 boxcar loads (enough to make 2 million gallons of wine) was purchased by a single buyer. However, the “home” bootlegger was the principal buyer, and focus shifted from varietals that could make high-quality wines to those that could survive the journey east. Alicante’s thick skin and resistance to rot made it a good candidate for the long cross-country trek. However, it was the red pulp and intense color that allowed for a second or even third fermentation when additional sugar was added. These Alicante sugar wines were referred to as “jackass” wines, and the process could boost the yield to as much as 600 gallons of wine (or something that resembled wine) per ton of grapes. This was more than twice as much as any other red grape, and that sealed the deal for Alicante. By the 1930s, Alicante was the second most-planted grape in California, and it accounted for a third of all grape production with vineyards approaching a total of 30,000 acres by the 1940’s.

With the repeal of the 18th Amendment, focus slowly shifted from quantity to quality, and as the vineyard saw a resurgence of other classic wine varietals, the acreage devoted to Alicante Bouschet started a gradual decline. By 1985 acreage had dwindled to less than 3000, and by 2016 the reported acreage was just under 1000. Terroir is important for a varietal and no less so for Alicante Bouschet which thrives best in hot drier climates. While still primarily used as a blending grape by most wineries, Alicante does well in Amador’s Mediterranean climate, and can, with the proper attention, make a delicious, concentrated dark red wine. Floral notes and rich red fruit aromatics with a round mouth feel, pleasant acidity and soft tannins are all possible with proper pruning and moderate yields. It is one of those wines that always presents better when it has had time in a bottle. Time helps to develop the tertiary aromas which add complexity and enjoyment. At the Big Crush we will be offering a chance to taste our new release; a superb, aged, double barrel Alicante Bouschet, from the 2015 vintage with limited availability. Remember, if you have a question that is looking for an answer, then email it to newsletter@brayvineyards.com

Website: Brayvineyards.com is the place to go for additional information on the winery, upcoming events, and past issues of this newsletter. It is also the online store for our current inventory of direct shipment wines, the available library wines, Bray logo clothing, and other winery paraphernalia. If you can’t visit us in beautiful Amador County, then perusing the website is the next best thing.

Tasting Room: Our tasting room is open Friday from 11:00 a.m. to 4:00 p.m., and Saturday and Sunday from 10:00 a.m. until 5:00 p.m. Our tasting line changes with the season and at the moment we are pouring the ‘16 Verdelho, ’16 Barbera Rosato, ’14 Brayzin Hussy Red, ’15 Sangiovese, ’14 Alicante Bouschet, ’17 Late Harvest Zinfandel, and the ’07 Petite Sirah/Zinfandel Port. Don’t forget our red table wine available in a refillable one-liter “Growler” emblazoned with Bray’s tractor logo.

Commenting has been turned off.